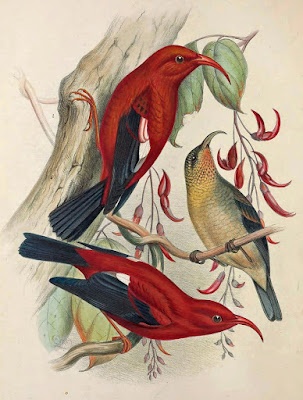 The American Birding Association's selection of the ʻiʻiwi as its 2018 Bird of the Year poses a typographical challenge: What to do about the ʻokina? That "single quote" at its start, and right between the i's, is one of two Hawaiian diacritical marks. It denotes a glottal stop, a quick throat-catch like that in uh-oh, so ʻiʻiwi is pronounced ee-EEvee.

The ʻokina appears once in the main heading of the Bird of the Year page, but is omitted throughout Nate Swick's explanation of why the honeycreeper was chosen. This inconsistency is avoidable and the omission is undesirable. The ʻokina is not optional punctuation but a purposeful letter.

The ABA isn't awkward alone. The Birds of North America account at the Cornell Lab of Ornithology spells ʻiʻiwi three ways (unique treatments in heading and citation, main text, and image caption). The American Bird Conservancy gives this bird two marks but resorts to the straight quote (prime) rather than employing the proper character. The Hawaii Audubon Society leans on the backtick (grave accent) on the web, but at least uses good-looking ʻokina in its printed handbook Hawaii's Birds. The American Ornithological Society checklist presents iiwi without any ʻokina, as does brilliant Bird of the Year artist H. Douglas Pratt in his Enjoying Birds in Hawaii. Pratt justifies his choice by stating the Hawaiian name has been adopted as an English name and so is acceptable without the marks. Maybe this reflects the thinking at the ABA and AOS, too.

On the other hand, here's Ted Floyd covering his bases on Twitter:

Years ago, cautious ʻokina workarounds may have been necessary in web publications, but the character needn't be misrepresented today. The Unicode standard identifies the ʻokina as being encoded U+02BB (modifier letter turned comma), which can be rendered in HTML by the entity &#699; or in Windows with alt +699. If all else fails, writers can find a correct character and simply copy/paste.

This nit is little and I'll admit my own long-held ʻokina consternation. What's more important is that the ABA is highlighting the ʻiʻiwi's plight. This charismatic icon persisted through an exploited past only to face a risk-rich future. Focusing attention for 2018 on the bird, however it's named, is a mahalo moment.

Update: No surprise this is far from unexplored territory: See the ABA blog on this very subject. Consistency, though, remains key.