For the record, abridged results of two tests of our Comcast throughput on a Monday evening, thanks to the University of North Carolina.
by scott.xot at Monday, September 26, 2005 6 comments: 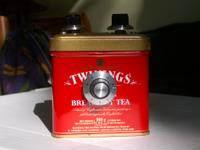 I wanted to build N1BYT's Wheatstone Bridge Regenerative receiver into a tea tin and for the most part I was successful. But mounting the board on the underside of the lid and several bits of hardware on the tin's body caused wires to break when I needed to tweak and adjust the receiver. So I'm switching enclosures. These photos simply record the cute approach. Maybe someday it'll be back in here.

This receiver design was published in QST in August 2001. 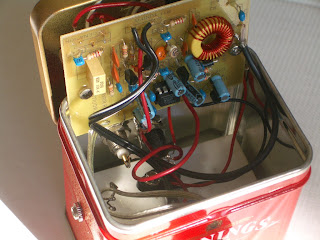 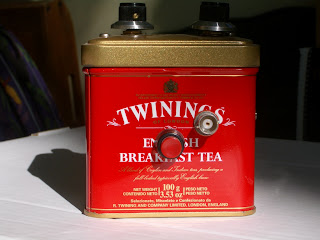 From the Society of Wetland Scientists

The impact of the hurricane would have been reduced if Louisiana had not lost so many of its coastal wetlands. A map summarizing wetland loss in Louisiana from 1932-2000 is posted on the web site of the National Wetlands Research Center (NWRC) (http://www.nwrc.usgs.gov/). Note the particularly heavy loss south, southwest, and southeast of New Orleans.

The ocean is strong, but natural coastal systems are good at cushioning the impact of massive amounts of rushing water.

Marshes and dunes are not preferred for permanent human habitation, however, so we destroy them and build walls to prevent flooding. It works well, by and large, but Mother Nature can do wonders.

Arguing that New Orleans would have been spared if the Corps of Engineers got the money to bolster dikes misses the point: Living in flood zones is risky. Choosing to take that risk means accepting the consequences. Low-probability events are not no-probability events.

Excellent point, if ill-timed. But the backlash -- oh, my! How can anyone already be so certain about the efficacy of rebuilding in an automatic deep-flood zone? Go ahead, but let the investment dollars come from the locals, not the feds.

Let's hope I don't make a habit of agreeing with Hastert, though.
by scott.xot at Friday, September 02, 2005 No comments: