Today's Portland Press Herald features Joe Kelley, a Maine geologist who is serving on a National Research Council (National Academies) panel advising federal and local officials on restoring and protecting coastal Louisiana. Their work was completed this summer, but they reconvened in the wake of Hurricane Katrina.

Kelley has had considerable positive influence on the management of Maine beaches, and I have found him to be straightforward and enviably objective. So, having made statements here and here about addressing the devastation, I now wish to share excerpts that will further refine my position...


In an interview this week, Kelley said federal and local officials have unrealistic expectations. ... Kelley believes officials should abandon some areas of the delta with a policy of "managed retreat" and focus on projects that are more important to the nation's economic interests.

This fits my view well. I will need to alter my mindset, though, to accept another Kelley statement that has drawn criticism from environmentalists. He was quoted in the New York Times (requires payment) as saying that healthy marshes would not have protected New Orleans. As paraphrased in the PPH:


People interested in restoring marshes have used storm protection as a rationale to gain funding for their projects, he said, but the role marshes play as a storm buffer may be overrated. [emphasis added]

Until we can accurately forecast the degree of flood protection offered by salt marshes (not likely), we should err on the side of protecting and restoring them.
by scott.xot at Monday, November 28, 2005 No comments:

On the front page of its latest newsletter, Another Chance Animal Rescue proudly described its activities supporting a feral cat colony in southern Maine. While those involved must be good-hearted people, their actions can have severe negative consequences for wild birds and other animals.

Domestic felines should be just that: house cats.

Incidentally, the Another Chance Animal Rescue Mission Statement suggests that supporting feral cat colonies is outside their intended purpose. The organization's board ought to examine this activity and withdraw its support.
by scott.xot at Sunday, November 27, 2005 No comments: 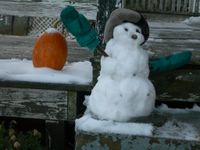 Our Thanksgiving Snowman, bridging fall and winter, thanks to C & A, who proved an inch of snow can be enough.
by scott.xot at Thursday, November 24, 2005 No comments:

A warm, relaxed, highly satisfactory evening at the Center for Cultural Exchange in Portland, Maine, with Liz Carroll (fiddle) and John Doyle (guitar and vocals). It would seem we benefited by being the last date on their tour, and of 2005 -- they were loose and congenial, though perhaps that is normal for them.

Thankful to be there, right up front, absorbing. The following is likely riddled with errors, but is based on notes taken during the performance. Corrections appreciated.

This morning: "Our pheasant is back!"
Fifteen seconds later: "There's another one!"

And within a minute we were watching five of them, two cocks and three hens, from the dining room window. They gathered under the burning bush and wandered a bit. They were unfazed by cars passing 20 feet away.

Getting ready for work took precedence over pheasant watching, but during one pass by the window I noticed they were looking pretty skittish. A neighbor across the street? No. Nothing out of the ordinary until... "Hey, Scott, there's a hawk out there."

Indeed there was. Perched in the burning bush, less than a meter away from the five prospective breakfasts, was a large accipiter. For the next ten minutes, I watched a fascinating game of cat and mouse, as the hawk tried to catch one of the pheasants.

The accipiter flew around the bush, but the pheasants kept moving to the opposite side. The hawk tried catching them on foot (first time I've seen a hawk "run" like that), but the prey were too quick. One cock pheasant made a break across the yard, but the hawk was unable to snag it before it reached the blackberry hedge.

Finally, a hen got separated from the group and the hawk made its move. But she turned on him, spread herself out, and the hawk stopped in its tracks. They froze like that for a tense twenty seconds before the hawk decided it didn't know how to finish the job. It flew off into nearby trees, then flushed out of the yard when the neighbor kid went to catch the school bus.

It was a hatch-year accipiter far too big to be a sharpshin. My impression of size put it in the overlap zone of Cooper's and Goshawk. Book illustrations suggest it had the face of a goshawk and the tail of a Cooper's. Even with all that time staring at it, I don't feel confident pinning it down to species. Would a Cooper's Hawk go after a pheasant?
by scott.xot at Thursday, November 10, 2005 No comments:

GuppY's out. Too-frequent updates, language barrier, some question about branding, uncertainty about strength and flexibility.

Joomla's out. Too difficult. Too much rigidity in templates. Overkill?

Blogger holding its own, despite its shortcomings. For "personal" effort, it will do. Plenty of learning to do elsewhere.

Static is still straightforward. And familiar.