[acidfree:195 align=right]When I read the intended operating scheme of the Ducie Island DXpeditioners, I was disheartened. With my HF station restricted mainly to the Elecraft K1, working a 25 kHz split is essentially impossible.

Then it occurred to me: My new Grundig G5 would be my second radio. All that remained was to learn if it, with just a built-in telescoping antenna, would hear the South Pacific station well enough.

It did. Ten days into the VP6DX operation I entered the radio room shortly after dawn, tuned to the low end of 40 meters, and found the operator calling CQ with intermittent answers. I placed the K1 up 25 as requested and within three calls heard my full and correct callsign coming back.

My Political Compass, circa 2008

You're right there with Gandhi! 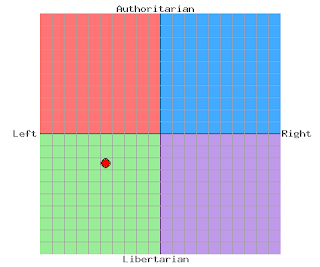 My Political Compass. The Gandhi connection is in the analysis here.

It's Obama in Maine

This guy is lined up for a big advantage from pledged Maine delegates. Cool.

Our town's delegates to the state convention were split 9-9, with Clinton getting a handful more votes than Obama. We had 171 voters.

The Daily Kos referenced this boston.com article explaining how Maine's five types of delegates are apportioned. It's a bit confusing.