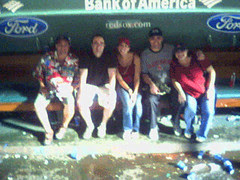 Greg Writes, thank goodness. I need fine examples and his is one.

I'm especially pleased to have taken the path to CNN from his August 22 entry on X.

Stop the presses - we have arrived! On page 41 of the August issue of Wired magazine:
Wired: Morse code
Tired: texting
Expired: shorthand
(Thanks, Steve, KI0KY)

A quick googling (wired morse code) took me to the premonitive wired/tired title from larry borsato. He's referencing a Times Online article telling of an Australian nonagenerian and his buddy using the code to whip some cell toting whippersnappers in a communications contest.

A similar competition was ably staged later on Leno.

The morse rally is building. Hurrah!

Hams speak an esoteric language, a mix of radio slang and callsigns, and they like to talk about the enduring virtues of Morse code

That's Mark Baard, 3 months before page 41 above, writing in Wired itself. The quote's actually from the second page.

I've known Morse code since 1972. My Quite Happy Grandfather taught me. I've used it often since summer '73.

I love its rhythm, cw dx, and the mystery message within another sender's signals.

The FCC plans to eliminate Morse code as a requirement for all amateur radio license classes. A sad decision, but the code will stick around regardless. Till 2178? Sure. And beyond.

The ARRL, which advocates retaining a test for extra class licenses only, reported the FCC's notice of proposed rule making.

Keep testing on the books, I say. No time to say exactly why right now, though.

The eVB runtime and TrackSat installed smoothly and the application looks cool. Even gracefully downloaded up-to-date keps. Frequent errors, though, re: division by zero. Not jumping at the chance to register for $19 quite yet.
by scott.xot at Tuesday, August 09, 2005 No comments:

Would have been nice if the oopdreams Bubblets name was left alone.

Why TrackSat caused me to begin a blog

TrackSat/CE is satellite tracking software I intend to use on a Dell Axim X30 running Windows Mobile 2003. It's a ZL3AD program I saw listed at AMSAT. I downloaded version 2.20. At the download, the author linked to a required Microsoft file: evb.mspx (?). That link was broken, but I was directed to msvbppc.armv4.cab, which I downloaded. I hope this works in place of eVB dot whatever.

The "future" does not seem bright for eVB if this Microsoft chat was on track.

Native Code Application Development for Windows Embedded Platforms.
Posted March 4, 2003
Chat Date: February 5, 2003
From Host Zoran Galovic, Embedded MVP
Q: Have any decision been made concerning the future of eVB, of any? [sic X 2]
A: eVB is going to disappear. Everything is moving towards VB .NET and eVC is an interim solution.

I'll install the two files in a couple of days.

N7WSB gave TrackSat a decent review for an earlier release at eham.net.

It's that quote that caused me to start a blog. Blogger can be a convenient place to collect clips and questions.
by scott.xot at Saturday, August 06, 2005 No comments:

It's always best to start at the beginning... 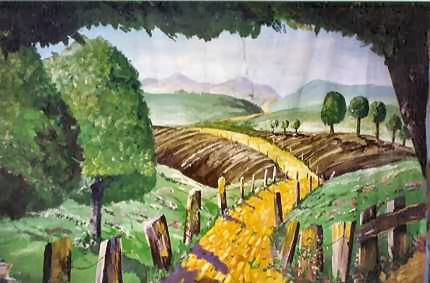 ...then you quickly google "yellow brick road" for images and find Maquilas Que Matan's blog right away. Whatever we may find at the end of the road, it seems an auspicious start.
by scott.xot at Saturday, August 06, 2005 No comments: