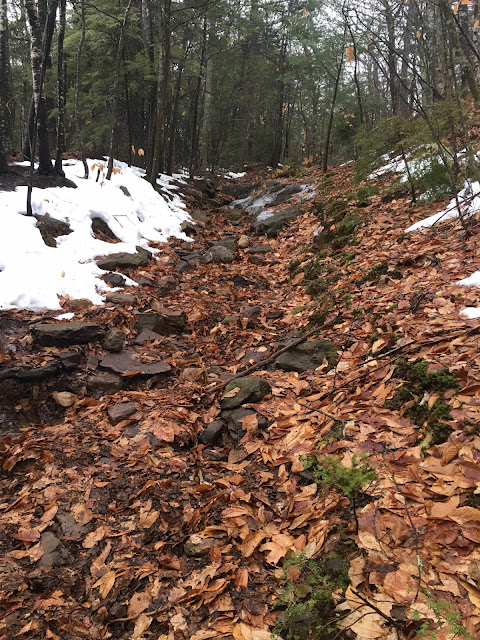 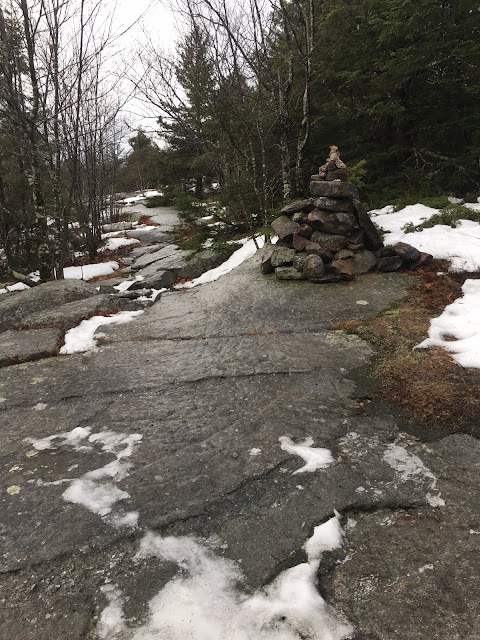 I wanted to activate the last of the close summits before the end of 2020 so I would be eligible to go again in the new year. I don't see long drives to high peaks on the horizon and aim to make the most of the 1-pointers that will fit into a 6-hour trip.

I'd been up Parker Mountain once before, 10 years ago on a letterboxing jaunt for Kollaps's 12-carve series with moongazer. I found one of those boxes again today, tucked under a small slab beside a short pine, a glaring lock n lock that needed a good rehiding. I also found a geocache and made a trade.

The way up was mostly clear, with stretches of trampled snow, stony drainages filled with beech and oak leaves, and. some. steep. parts. Rocks and ledges had an icy sheen. I placed no foot there. Except for a few chickadees, nuthatches, and a creeper, the woods were quiet. Above them I heard only occasional squawks from ravens.

My goal was to make my first contact by 14 zulu and I made it (or just about) thanks to a friendly local on .52 who ended up being my only VHF QSO.

Stringing wire took longer than planned; it was almost 15z before I got on HF. Over the next hour I managed 27 contacts, mostly on 20 meters. Fifteen offered nothing and 40 and 30 were slow going. I was receiving reports that shrank confidence in my antenna and my numb fingertips were ruining my code, so it was easy to throw the switch at 16:00.

I was almost done packing when two hikers passed through. On the way down I said hello to a couple with dogs and, a while later, a solo hiker. This last was a neighbor who clears the trail when treefall blocks the way. He remarked how difficult it is to attract strong, young helpers for himself and the septuagenerians who do most of the trail work.

I was home for lunch before 1 o'clock and done with uploads a little past 2. This was the 20th activation of W1/NL-010 and the sixth this year. I added the first 30-meter contacts to the collective log and brought its total to 274. Would return.