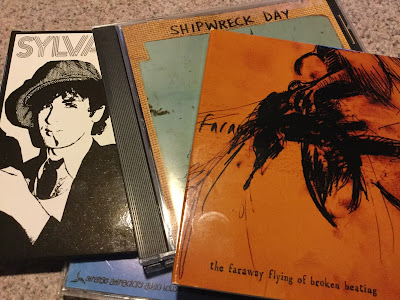 A K warehouse-clearing deal put a big stack of CDs in the mailbox for less than the cost of one at retail. The friendly mail order department "miscounted," so I had 14 new discs to spin. First time through, I picked blind. Second time through, I better knew what was coming, but still had things to learn and opinions to form. As a result, I've made a keep-or-pass list that looks like this (rated against each other, not all of musicdom):

Sarah Dougher: Day One (1999) K web
*** Easy on the ear. Bella Abzug and a couple more rise above the neutral.

Wolf Colonel: The Castle (2000) K
** Messing around after a bad breakup. Keep practicing.

All these someones committed something to semipermanence, suspecting sometime somewhere someone else would take it in and care. The hits reveal where I do. For those most potent, I wish I'd been there then.