Posted November 23, 2013
My GENERATE day was cool and bright from morning to night, an adventure for edging ahead. Its true start was the bridge walk, a brisk excursion after the drive. My aim was to log a letterbox and I did. I also enjoyed a second fortuitous find, a sign left behind. Then I was off to the Andross entry.

"Accidental collisions," Adam Burk said, and my note taking began. It was TEDxDirigo Sunday and I sat self-satisfied. 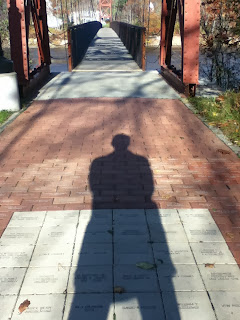 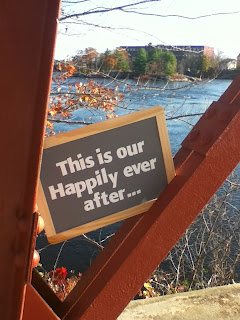 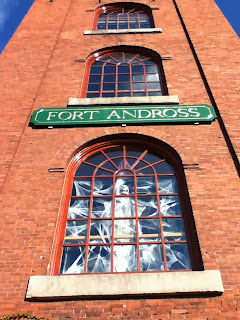 The first talk was excellent: Voot Yin of MDIBL and Novo Biosciences Inc focused on tissue regeneration with ZF143 (ZF for zebra fish, which regrow a clipped tail at an astonishing rate; ZF143 for "a nontoxic drug that rescues defects in regeneration"). Might humans effectively regenerate damaged tissue with such a drug? That's what he hopes to find out. Along the way, I assume there'll be scads of "induced amputations" among sacrificial subjects: fishes, salamanders, and other lesser creatures.

Three cheers for Alicia Eggert, speaker two, who weaves subtle surprise into clever sculptures. Her videos were fun to watch, though Pulse Machine made me wonder how many parts will get replaced before the paired elements clock their last beat. I appreciated her Strunk-and-White-ish goal to "communicate as clearly and concisely as possible."

Local Maina Handmaker promoted her laudable quest to repurpose ancient freight barns into a year-round farmer's market, Jenny Ryan experimented with the TED format to press a point about design, and Rafael Grossman hyped Google Glass. Then Chas Lester vocally percussed at us up to the break. 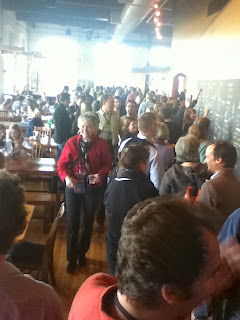 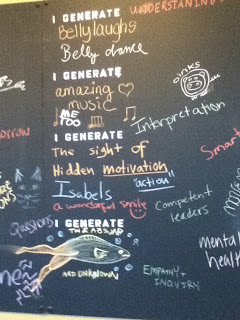 After lunch, but before lunch was over, I went back to the presentation hall and found Apparatus Dance Company on the ropes. It was the right kind of unexpected. They opened Session Two with a performance and an explanation of how they created the back wall art while practicing, making "maps of where the dance has been" for reperformance or revision. (I had thought the art was a preschool's contribution.)


Insert #hashtag video here, followed by David Buchanan telling of Clarence Thurlow and the Fletcher Sweet, Mohamed Nur saying while living here he has "never experienced peace," Liz Neely remarking on paper while wearing a dress to start a chain reaction, Eli Mellen (the next link) pointing me at mainemakers.me, and gkisedtanamoogk unwittingly completing the apparel trifecta. The elder draped a wampum belt over his left hand while addressing truth and reconciliation and leading me to consider "What does it mean to acknowledge we live on the homelands of Indian country?" 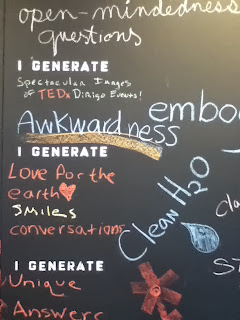 The tiramisu line at break didn't abate till nearly too late, but I got a tasty little bowl to take back in. I sat next to the knitter in the glow zone and started a tweet.


Adam said, "This dot is a cool elevator" and I now knew why. TED's red circle centers attention, gives a lift.

Next up on the crimson disk was Yona Belfort putting hoarder and minimalist on opposite sides of the value threshold and equating shopping with gambling. And what was it urchin eater Graham Morehead was saying about discovering simple solutions through complex systems?

Nancy Andrews kept me off balance for a bit. She was inhabiting delirium once upon a time and works out her post-ICU Syndrome in gently unsettling art. In an abrupt shift, Serena Galleshaw brightly reviewed how she and her friends created their own reasons to stay (and as their neighbor I'm grateful they did). John Coleman said do nothing. He also said stay toiling. Then Bianca Fresh (Abdalla) got us to stomp and clap and slap thighs in a 500-hand hambone. She and Chas went playfully head to head to end it.


I did a little post-intensity wandering over the old mill floor, stabbing at a couple of chats as the crowd thinned, but that was a wrap. It was five and almost night, a chilly march back to the car. After one wrong turn I just aimed at twilight to find home. 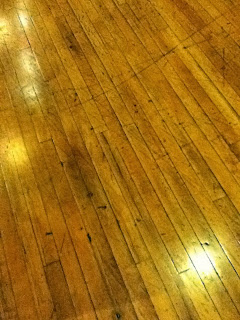 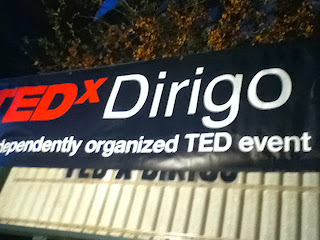