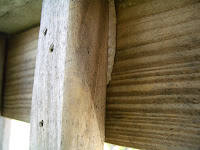 Wisteria had taken over the loft deck. The left end of one railing had been pulled down to the deck, the screws yanked through the wood to let it down. Some balusters were akilter.

The pruning shears were in hand. The vines were mostly no wider than a half inch and made mostly easy cutting. It was going to be a selective cut at first, but telltale signs around three sides of railing meant it was going to be much more forceful.

While I was at it, I found this odd growth under the deck, on the outside toward the maple. When I found the second I can't recall, but it was in a clipped end along a leaf. I let it be for a while and couldn't find it when I returned.

I had probably been looking for my glasses and the camera when the easy access larva disappeared, but nonetheless leaned over the rail to try aiming this shot. 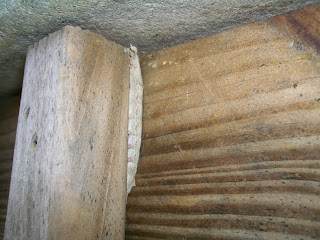 Time to go back to the caterpillar book. After a glance at bodyforms leafed to the moths and spotted the underwings. The orange flash reminds me of one I almost mowed last summer, which showed its color when askew from a near miss.