Second annual pilgrimage to the Portland Expo for a D-League basketball game, this one with the added incentive of being Girl Scout day. Two brownies enjoyed what must be among the most exciting games played by the Maine Red Claws this season or ever.

The game was close at the start, but Texas pulled away by halftime. Sometime in the third quarter, a ho-hum crowd started to sense a shift and the atmosphere grew steadily more energetic, fueled by the reawakened Red Claws. 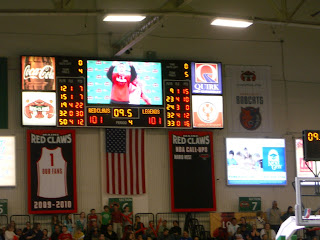 Regulation ended even and in overtime Maine capped a brilliant comeback with a win.

For the visitors, Justin Dentmon and Dominique Johnson caught my eye (though the former missed badly on the buzzer shot that would have won the game in the 4th).

For the home team, Mario West and DeShawn Sims drew attention, while Magnum Rolle left an impression.
by scott.xot at Saturday, April 02, 2011