Stick the kit in it?

Postscript: While we're at it, how about Gummi Lightning Bugs as a stocking stuffer?

Oh, but this Plush Wild Clingers Lightning Bug is the most realistic I've seen yet. 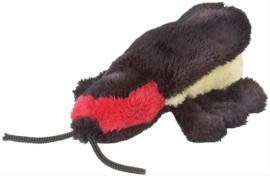 By way of explanation... At this year's Lobstercon, W1REX distributed the Maine Bugs kit, a nifty programmable device designed to mimic crickets and lightning bugs. Cricket chirps indicate an accurate temperature reading and the firefly flashes the callsign of the builder.

Mine was built, programmed, and modified this summer, but I wanted to find a clever way to package it. I hunted for an oversized tin insect to no avail. I followed other paths without luck.

One day last week, I moved something on the workbench and the kit hit the floor. "Alright," I grumbled, "time to button up this project." One last flurry of searches resulted in the cute toys mentioned above, but none looked like a solution. So I pulled out a Hershey's truffle tin (very much like an Altoids tin) and mounted my Maine Bug in that.

If the ideal disguise appears before my eyes, I'll consider migrating the project, but for now it's one more item off the to-do list.