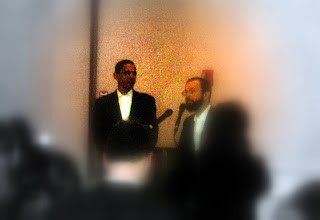 In his Primary Source blog at boston.com, James Pindell writes of today's New Hampshire visit by not-yet-candidate Barack Obama, "The atmosphere around Obama accounted for more of the discussion than what he actually said."

At the Portsmouth book signing, we were happy to have a chance to hear the man speak, but didn't find a lot to get charged up about. Well, it is a book tour, after all.

In fact, even though Obama "received two standing ovations before he uttered a public word in New Hampshire" (Pindell again), the rounds of applause for bookstore owner Tom Holbrook and Portsmouth Mayor Steve Marchand were equally spirited and lengthy.

Health care, energy, how our politicians behave, and Iraq were Obama's first four topics after his introductory remarks, referring to them as the reasons that the 2006 elections meant so much to so many.

He attracted 750 people to Portsmouth and 1,500 more to Manchester, turnouts that ought to hint to him that a portion of our populace is ready "to renew, to reinvigorate" its dedication to our nation's governance.

We must wait a month to learn whether Obama will rally us as a candidate for President.

UPDATE 2006-12-12: Missed the analysis on The NewsHour with Jim Lehrer on the 11th, but got the audio via PBS (attached below till I gain the courage to get Drupal's audio module up and running). Wish they had video; we might have been on national television!