Not intermediate, but cattle? 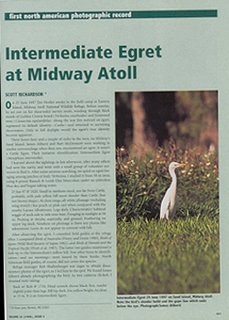 As the author of the article in question, I am eager to see the clarification, which is apparently approaching a draft stage now. Ever since I was informed that the American Ornithologists' Union check-list committee passed over the "intermediate" egret report in its 45th supplement, I have hoped to read a well documented alternative view. I expect to be presumed mistaken and am comfortable with that. It's just hard to be wrong so publicly.

It happens, though; I am not alone. After recounting a handful of other questioned identifications recorded in NAB, Brinkley goes on to write:

It is remarkable, and very humbling to one's own grasp of bird identification, to receive opposing opinions from experts in their fields!